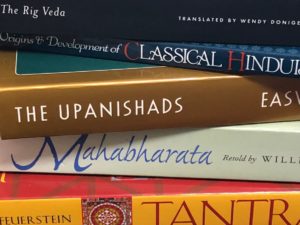 Yoga is so much more than the practice of yoga postures. Dive deeper into Yoga with this twice monthly multimedia lecture and discussion series. All levels of practitioner are welcome, including yoga teachers who want to expand their knowledge.

Yoga Philosophy Talks continue on the 2nd and 4th Thursday evening of every month. Investment: $15 per talk (or $40 for any 4 Talks) payable through Venmo/Erin-Mathiason or paypal.me/taichiyogaonline. Video access is available if you can’t attend “live.”

Video recordings are available for previous Yoga Philosophy Talks.  Contact Erin to offer these presentations online for your group or studio:

You can purchase these video recordings by contacting Hatha Yoga with Erin. Investment: $15 per video.

Contact Erin to present yoga philosophy and history for your studio (online only at this time), either as a part of teacher training or as a continuing education workshop.

Erin was on the faculty of Mudra Yoga’s teacher training program, offering training in yoga history and philosophy including the Yoga Sutras and the Bhagavad Gita (the studio closed in December 2019).

Erin has extensive training in Yoga philosophy, including hundreds of hours of study with Dr. Douglas Brooks. Erin completed Embodied Philosophy’s Yoga Philosophy 300-hour Online Training & Certification, with an emphasis on the Bhagavad Gita. She has studied and taught The Gita, Patanjali’s Yoga Sutras,  Tantra philosophy and more. Erin is currently writing a book on the contemporary history of American yoga.